Here at Local 7, we are proud to be leaders in our industry and to demand better benefits, pay, and workplace conditions for all of our members while we build the future of our Commonwealth and our communities.

Recently, our union brother Frank Murray was featured in The Dorchester Reporter sharing his experience as a Local 7 member and the difference being part of a union has made in his life. We are proud of all of our members and our belief that unions are vital to growing a strong middle class where all work is valued and rewarded. Congratulations to Frank Murray on all of his accomplishments with Local 7 and beyond!

You can read the full op-ed below!

I’m ‘Living Proof’ of the Power of Unions

By Frank Murray – Special to the Reporter

Along with learning math, science, and other disciplines at the kitchen table, I learned the benefits of being a union member. My grandfathers were Teamsters Local 25, my father was a union laborer, and my uncle is a union gas worker. Being part of a union gave them job security, fair pay, and high-quality health care, and helped anchor our family in the middle class. As a member of Iron Workers Local 7, I too have a voice on the job to negotiate better wages, benefits and working conditions.

On average, union workers’ wages are 11.2 percent higher than those who are not in unions. And 96 percent of us union workers have employer-provided health care, compared to just 69 percent of the non-union workforce. With so many companies outsourcing, hiring gig workers, and failing to provide career stability, the fastest way to financial independence and the middle class in this country is to join together in unions.

I’m living proof of that.

I attended Shawsheen Valley Technical School in Billerica and after graduation, I was mentored by a family friend, Tom Ward, who was a lifelong member of Iron Workers Local 7 in Boston. Tom guided me through the apprenticeship application process and remains a mentor to me today.

Nine years ago, as an apprentice, I was assigned my first job, working on the construction of One Seaport, a one-million-square-foot residential and retail development that includes two 20-plus story towers with apartments, restaurants, nightclubs, and other amenities. We all drive by the cranes and the massive towers going up across Boston every day, but to be able to work on a project of that size and scope as I started my career was incredibly gratifying and educational.

The members of Local 7 took me under their wings as I began working on that job, amazed at the magnitude of the development and the skills and professionalism of my fellow union members. Safety, I learned, was always a top priority.

Right from the start, I was paired with professional and experienced men and women who taught me the trade and safety protocols, such as the importance of working in pairs, avoiding weak floors and openings, fall protection measures, and other job site precautions.

I’ve since worked on several major projects and am currently on the construction of a new 51-story tower over South Station. Just like those who came before me and helped me, now it’s my job to help the new apprentices stay safe and perform at the highest level while working on these massive buildings. Luckily, Local 7 provides plenty of training opportunities for us to stay up to date with the latest equipment and industry standards.

I have great pride in the work we do. The structures we build we put together from the rebar that goes deep into the earth right to the very tip of each building. There’s nothing quite like a topping-off ceremony on a building that you’ve spent months or years of your life working on.

Local 7 provides me the financial security I need as I start to build my life and my family. I recently purchased my first home, in Charlestown, and have my first child on the way.

Being able to buy a home in the city where I work is elusive for too many people my age, but it is possible with union wages and benefits. The opportunities I’ve received with Local 7 have opened so many doors and allowed me to join the middle class in Boston and live in the city that I love so much.

I’ve also made lifelong friendships and have great camaraderie with my brothers and sisters. We are dedicated to improving our communities. I’ve joined with several colleagues to form a coalition of young members called the Local 7 Next Committee, and we are committed to bettering our neighborhoods and participating in civic events to improve the lives of those around us. We’ve made school supply donations, raised money for veterans, and organized food drives for workers impacted by Covid-19.

The world has changed a lot since my father and grandfathers worked in the unions. But I’ve seen firsthand how, if we all work together, our unions can not only build a better Boston while on the clock, but we also can live here and make the city a better place every day.

Frank Murray is a member of Iron Workers Local 7. 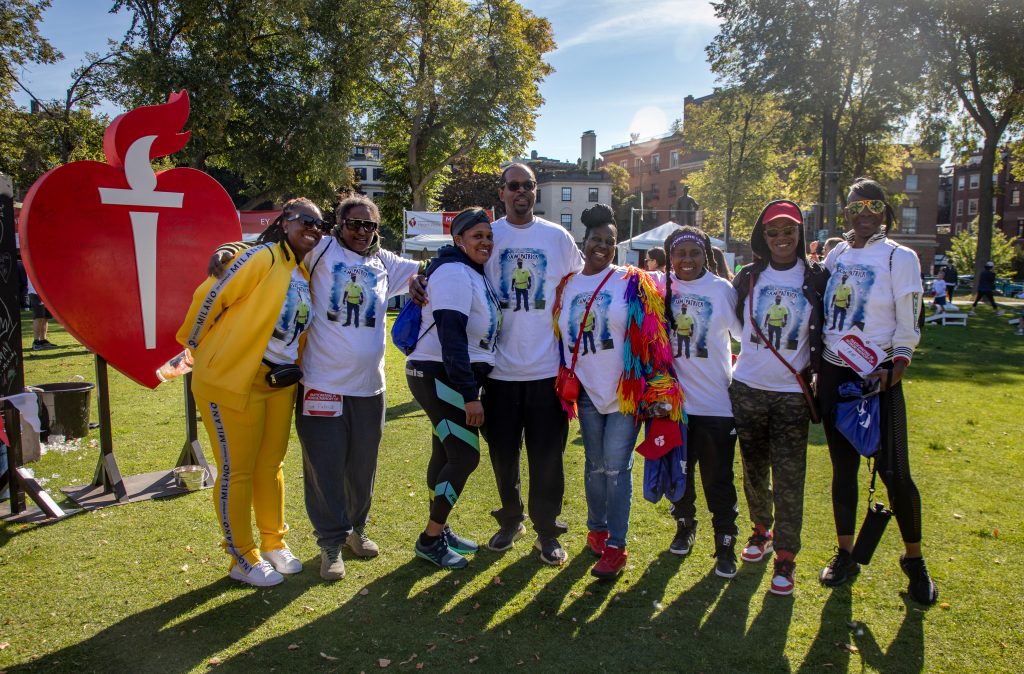 Sam’s Soldiers raised money for lifesaving research and programs while celebrating Sam’s memory. The American Heart Association Heart Walk is an annual fundraiser that supports heart disease, pediatric heart disease, and stroke research. In addition, the walk allows attendees to share their stories of survival and honor their loved ones. Together, participants join more than a million people in more than 300 cities across America to stand up against heart disease and help save lives.

Thank you and congratulations to everyone who participated! To make a donation, please visit this link.

If you would like to learn more about the ERA or get involved in future initiatives, email iw7era@gmail.com or visit Ironworkers E.R.A on Facebook.

We’re excited to highlight this feature of the recent topping-off ceremony of the UMass Chan Medical School, where Local 7 members have been hard at work. With 5,873 steel beams and columns locked into place, members should feel proud that their hard work will ensure that researchers and students will have a safe place to work and learn for years to come.

This 350,000-square-foot building will open in 2024 and will house research for a new generation of life-saving discoveries and other breakthroughs in the way of modern medicine.

Congratulations to all members involved in the project!

Local 7 is proud to announce an exciting opportunity to unite with tradeswomen from across the region at the first-ever Women Build Boston conference!

Meals and refreshments will be provided.


Join fellow tradeswomen for a day of networking, learning, and leadership development opportunities. All are welcome, from apprentices to experienced journeypersons.

To book a room at Encore, visit this link. Rooms are available on a first-come, first-served basis through today, September 14. For information regarding free parking, click here.

Sign up today and be sure to spread the word! To learn more and register, visit WomenBuildBoston.com.

This Labor Day, we joined our Brothers and Sisters in the movement for breakfast and a rally hosted by the Greater Boston Labor Council. We heard from workers across industries about our ongoing fights and the issues affecting our members and families.

We also heard a special keynote from Vice President Kamala Harris. The Biden-Harris administration is the most pro-labor administration our country has seen. They have done incredible work for union members through their policies on infrastructure, federal aid, and project labor agreements. 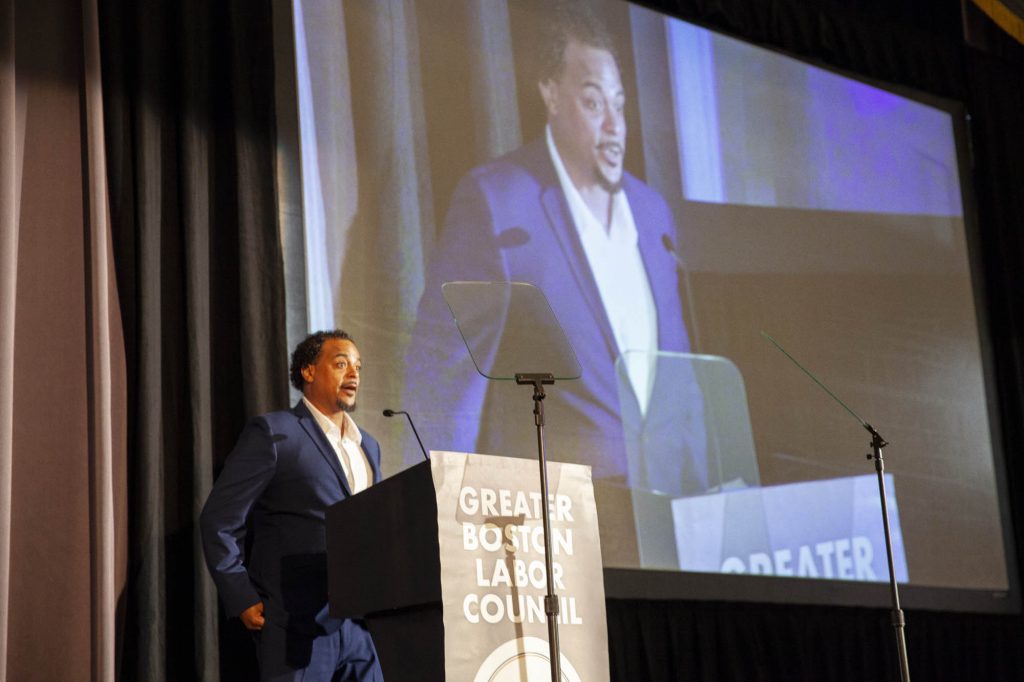 We are at an exciting moment in history— when this year, month after month, week after week, the news is reporting that worker power is on the rise!

At Local 7, we are proud to work with you to ensure that our workplaces are safe, and we thank you for your commitment to our union and to our movement.

We hope you will join us in supporting our injured Local 7 members at the Sporting Clays Fundraiser. Registration is open!

Ticket Information:
$25 per dinner-only ticket (A chicken dinner will be served)
$120 per individual
$150 with team registration of four or more
$200 per shooting station sponsor

All participants will receive 100 round shoot, a chicken dinner, refreshments, a goodie bag, cigars, and a chance to win a black powder rifle package!

Note: You can shoot without an FID card or an LTC as long as someone else legally transports the shotgun to the club, or you can share a gun with a team member.

Thank you for supporting this worthy cause and we hope to see you there!

Please remember to place your vote in the Massachusetts primary election TODAY until 8 p.m.

You’ll find voter resources and information at this link: https://www.sec.state.ma.us/ele/elevoterresources.htm

As you head to the polls, please consider voting for labor-friendly candidates endorsed by the MA Building Trades Unions:
We know we count on these candidates to support good union jobs, family-sustaining benefits, and strong worker protections.

This Labor Day is about all of us coming together, as a movement, for more than 130 years. We celebrate workers who have fought bravely throughout our history to make our country prosperous and fair in the face of brutal working conditions and fear of retaliation and who continue to fight together today.

We know first-hand that a strong labor movement is essential to supporting a strong middle class — and it’s no surprise to us that support for unions is surging across America.

Across professions, we’ve fought and won essential protections and benefits alongside our union Brothers and Sisters including the highest workplace and industry standards, minimum wage and overtime protections, and the right to a secure retirement. 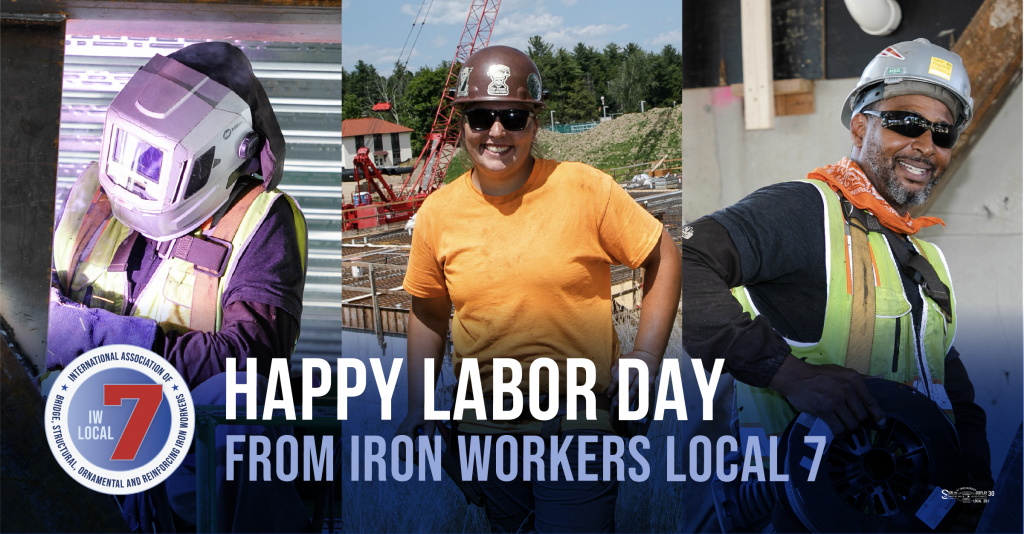 Together, we have persevered to create infrastructure that promotes safe workplaces, builds strong communities, and advocates for economic security for all.
On behalf of all of us at Local 7, thank you for your hard work, expertise, and dedication to our craft. We hope you all have a safe, enjoyable Labor Day, and take a moment to rest and be proud of all that we’ve accomplished together.

As we enter September, our union is proud to announce several new training opportunities.

The Welding Shop will be open for the month of September on a first come, first serve basis: Monday through Thursday, 4-7 p.m.

We ask that you please use this opportunity to obtain any welding certifications you might need before the next cohort of 2nd-year apprentices is scheduled for October, as the shop will be at full capacity when these classes take place.

Thank you for your attention to these updates!